After many years of wrangling, Archery Gardens, the development on the old College site in Archery Road, St Leonards, is nearing completion. Regency Place, comprising nine houses in West Hill Road, will be the first to become available in late September: four semi-detached houses and one four-bedroom detached house – on the market for a whopping £525,000. Next up, in November, will be the Orbit Housing Association properties on the south side of the site, closely followed by Queens Place to the north and then Archery Crescent to the west.

Part of the development includes the conversion of the original Victorian terrace, renamed Archery Villas. This forms one focus of the site in combination with Archery Crescent, the new buildings opposite. The other focus is the square in the middle of Archery Gardens.

The development is in the heart of the Burton St Leonards conservation area, which is why it has attracted so much controversy. The site was originally used, back in the early 1800s, as a quarry for Burton’s building work, then turned into a park and formal gardens as part of his original design. It was called the Archery Ground because a local archery association – whose patron was Princess Victoria, later to become Queen – used to practise there. A truly historic site.

In the 1960s, when historic buildings were less valued, the site was bulldozed and replaced by multi-story Hastings College. Although considered by many as an act of vandalism, there are nevertheless many residents of Hastings who have very fond memories of the college, which had an excellent reputation. In 2009, following the College’s decision to relocate to Station Plaza, the site was bought by developer Gladedale Estates (now Avant Homes).

It took until 2013 to obtain planning permission for this controversial site after numerous objections from local residents, including Save the Archery Ground (STAG). One of the main changes from the original application was a reduction in housing units from 163 to 121. The final plan satisfied not only the local council, but also STAG, who liaised closely with the architects, Marcus Beale. However, the site was then sold to Battle-based builder, Gemselect, the current owners and developers who submitted changes to the application.

Once again there were objections, including complaints of watering down the design specifications. But planning consent was eventually granted and construction started in early 2017 with the expectation of occupation beginning in late 2019 – so currently on target.

The construction phase wasn’t without controversy with talk of work starting prematurely before fulfilling preconditions of planning, and a stop notice was briefly put in place. Further controversy arose after the number of listed building conversions was halved and affordable housing reduced to the legal minimum of 25%.

Archery Villas to be
PICTURE: Gemselect

But now with construction on the way to completion, the reality of this latest phase of the ‘Archery Ground’ is beginning to emerge and comments seem to focus on its attractive and original design. The development will certainly have a huge impact on the area and lead to the ongoing regeneration of West Hill Road, described by Just Properties as one of the “most desirable roads in St Leonards”.

We are also happy to report that the site manager, Chris Banfield, has won the LABC Site Manager of the Year South East Award (LABC Warranty provides structural warranties in partnership with Local Authority Building Control). The award recognises the dedication and commitment it takes to deliver quality sites, and with the dubious quality of some building work in the town, this is definitely a plus. 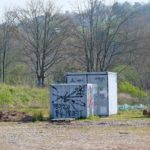 « Hastings Country Park To Say Goodbye To Well-loved Ponies
Can I Recycle This? Problems With Plastic »