You can’t have helped noticing the number of cafes spreading out onto the pavements of Hastings and St Leonards. You’ve probably concluded it’s something to do with the pandemic but may also be wondering if it will continue.

According to the Guardian (16/7/21), “alfresco dining and drinking could become a permanent fixture in England after the government extend pavement licences to aid the recovery of pubs, bars and restaurants …” The reason for this is that the government has already decided to extend the licences that ended last month until September 2022 – confirmation of the stated intention of Community Secretary, Robert Jenrick, back in March this year.

If you’re like me and have enjoyed pavement eating and drinking on holidays abroad, you may have wondered why this wasn’t possible before. The answer appears to be that it requires legislation, i.e. a change in the law ratified by parliament. In other words, it could have been done at any time, but has faced resistance or inertia.

Sometimes change happens when a variety of factors come together and one such factor is almost certainly the need to regenerate high streets. Hastings seems particularly suited to this change – although ways of dealing with high wind might be desirable.

Rory and Laura, Starsky and Hatch

One café set to benefit is Starsky and Hatch, newly open in Bottle Alley. This is an area that has been crying out for an injection of life. The proprietors of this venture, Rory and Laura, came down to Hastings when the pandemic hit their businesses in London – in Rory’s case, the customers of his café in the centre of London Bridge were all staying at home. They both have a long history in hospitality stretching back to both sets of parents; although having also been very successful in other areas of business, hospitality is where their hearts lie.

Back in October, they’d noticed the number of people willing to brave the elements and make use of outside cafes and restaurants and were convinced this was the way to go. But their search for suitable sites only turned up inside space.

Then one day walking along Bottle Alley, they came across an advert for ‘the hatch’. Although Rory felt Bottle Alley was “run down and unloved” what he saw was “shelter and seafront”, particularly the potential of the semi-circular space opposite the hatch.

In turning this vision into reality, Rory has nothing but praise for the council, pointing out that of the four councils he has had to deal with, they are by far the most progressive. He explained that councils are so busy doing other things that it’s important to come to them with fully formed plans that create solutions rather than pose problems – which is what he did. Part of the ‘solution’ is to show how bringing life to an area can help avoid the degradation that so often occurs with underused spaces. He will be responsible for cleaning, installing good quality furniture and turning that part of Bottle Alley into a destination. In return, the council licences the use of the outdoor space.

The view from Starsky and Hatch

Rory was insistent on the importance of businesses playing their part, saying about Hastings: “This place I love. I want to get involved in the community. This town has so much going for it.”

One sign of his willingness to get involved in the community is his inclusion of proper bin storage on the upper deck to hide the wheelie bins – litter, and with it seagulls, being a perennial blight on the town. With their meticulous planning and attention to detail, Rory and Laura’s Starsky and Hatch venture looks set to be a great addition to the seafront. 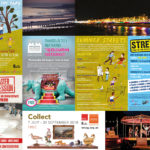 Summer Free for All