Standing the test of time

John Bray Estate Agents has been managing and selling houses in Hastings since 1872, making the company as old as the FA Cup, Jules Verne’s Around the World in 80 Days and the Hastings Pier. While the John Bray family may have severed its ties with the firm over 70 years ago, the business is still very much a family-run establishment with the same original values and commitment to customers.

The firm is now run under the leadership of Kate Darbyshire. Her family first became involved in 2016 when her sister bought John Bray, and her mother became a shareholder in the firm. When her sister moved out of the area in 2020, Kate took over as director and brought her husband on board as the sales and marketing manager. She already had a wealth of industry knowledge as she had set up a successful estate agency in the Old Town in her twenties.

Their operation may not be as big as other competing companies in the area, having only a modest team of seven people, but this hasn’t hindered the business. Everyone has their own defined roles within John Bray, which Kate believes has helped them create a bespoke service for the clients and vendors as they will be consistently liaising with the same person.

Kate comments: “One of the bonuses of having a small team is we will always remember who our buyers are. If something comes onto the market, we will think about who might want to go for that property and will then contact them. That way we are not wasting people’s time by sending them to go and see lots of properties that we know are not going to be right for them.”

Moving with the times

The firm was predominantly a sales and auction agent when it moved to the Old Town 40 years ago until around 2006 when they began taking on lettings. This decision came after the only previous lettings agent in the Old Town (Kate’s old business) closed and they looked to take advantage of the gap left in the market.

Kate admitted it was a challenge when she first took over as she wanted to rebrand the logo, website and office, feeling it was tired and stuck in the 1980s. However, it was sensitive to the company’s history and traditions.

“We didn’t want to alienate our longstanding customers, but at the same time, we wanted to make sure that they were not left in the past as people buy and sell houses in a completely different way now,” she said. “It was about getting that mix of the old and the new. We wanted to retain our high-quality customer service and tradition of knowing our buyers and vendors when they come through the door. But we also wished to be able to offer them the new technology that every other estate agent is using.”

While John Bray continues to display adverts in their windows for passers-by to read just as they did in 1872, property advertisement has changed massively over the last 150 years. For many years, the most popular way to sell a house was placing an ad in the local newspaper but, fast forward more than a century, this process has become outdated.

Social media has helped speed up the selling process for estate agents. Due to the ease of posting video tours and images of properties on social media, buyers have a better idea of what it is like inside a house before they’ve even viewed it. Kate compared the rise of social media in the industry to the introduction of property portals such as Rightmove in the early 2000s.

Since the first lockdown in 2020, house prices have experienced an unprecedented surge. Hastings, particularly, has recorded one of the biggest rises across Britain during this period – with the average asking price now £310,182. John Bray has experienced a limited supply in recent years with their stock being around a third less compared to this time in other years. Properties are being taken off the market within days when pre-pandemic they may have sat for weeks and months.

Seaside properties have been attracting greater interest due to buyers’ priorities changing during the pandemic. With many working in London finding out that they no longer have to go into their offices every day, people are moving out of their city properties in favour of a coastal home. After all, why would they want to pay triple the rent to live up in London when they could buy a much cheaper place with a beautiful view of the sea?

It’s also not just those looking to buy their first homes; some people are buying a second home property and then choosing to rent it out as an Airbnb for the some of the time. This has a knock-on effect as it limits the stock for the traditional rental market.

Kate described the increase of ‘DFLs’ (down from London) and out -of-towners coming to Hastings as being a double-edged sword. “Obviously it is good for the local market as it pushes the prices up and keeps things buoyant. But at the same time, it means that it is tricky for local first-time buyers to get on the property ladder as they are just getting outpriced. I really do feel for the local rental market and the fact they are being pushed out.”

The early history of John Bray

The firm was founded in 1872 in a small office at South Colonnade (now re-named Marina) by John Bray, who subsequently became an Alderman of the Borough. Early in the 1880s John took his brother Arthur into partnership. Together they traded under the name of John & A. Bray.

Around 1904, for various reasons, the partnerships were dissolved, and John continued on his own. During this year,
he was joined by his two sons, John and Charles. The outbreak of the First World War in 1914 led to young John being mobilised in the RNVR. In early 1919, he returned to the town to find the firm in a weakened financial position due to the difficulties of the war years. His father had suffered a stroke in 1918 and was taking no further part in
the business. He, therefore, assumed full responsibility and named the firm John Bray & Sons. In September 1921,
John Bray senior died at the age of 77.

With the coming of the Second World War in 1939, John Bray departed for war service, leaving the business in the hands of Mr Charles Hodge. When peace came in 1945, John Bray returned to a heavy legacy of business deriving directly from the German bombing.

After an active career of 46 years, John Bray retired, and in the following year, Nigel Petts acquired the business. Petts retained the well-known designation of John Bray & Sons. 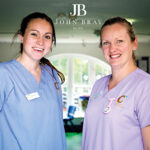