Story Time: at home on the pier

We humans have a great need for narratives. An example is the way my three-year-old granddaughter asks for stories about all the happenings in her life. After she cuts her finger or is sick, or even after she’s been told off for tormenting the dog, she says: “Make a story about it.” I have to tell the story several times, until she starts to join in and tell it herself.

The Covid crisis has underlined our great hunger for stories. Even if we don’t read books, days spent at home nearly always involve narratives told to others or listening to podcasts and watching videos that tell a tale.

Lily Gutierrez started Story Time “as a monthly storytelling night with the hopes of growing voices, of building community”. Last Sunday, there was a Story Time afternoon on the pier: it included a fund-raising raffle, with all profits going to the Refugee Buddy Project founded by one of the storytellers, Rossana Leal. The event was very well attended, with everyone sitting in the sun (in small, distanced groups of course): friends, teenagers, elderly couples, young and not-so-young families of varied nationalities. Some were there deliberately, others seemed to have stumbled upon the event and decided to stay.

The theme of the afternoon was Home. Three women read their very personal stories about what home means to them – stories aimed at adults rather than children. First, Jo Fairley’s story Fake Mum described her poignant memories of how she, with no children herself, provided a home for “a platoon of motherless girls”.

Next Rossana read her vibrant recollections of arriving, first in London, then Scotland as a child refugee. Her moving story documents the kindness of strangers as she travelled to “the land where giant men wear skirts” and concludes with a sense of warm optimism as she watches the Skids playing a free gig for Chile. Finally, Zo Daniels (the force behind CA4BL) read about a passionate love affair with the sea – an integral part of what is ‘home’ for her.

In between each reading there was music from Emma and Tain of Lemur Beats and songs from Elisha Edwards: soulful songs with evocative narratives – like Corinne Bayley Rae’s Put your records on. While this was going on, Stef Warren of Stella Dore was running an interactive art installation that encouraged the public to question ‘roles’ in stories and write comments on posters of traditional fairy tale characters such as ‘the handsome Prince’, ‘the Princess’ and ‘the wicked Step-Mother’ as well as creating a collage of pictures and comments answering the question: What role makes you feel most at home?

It was unusual and thrilling to have an open-air storytelling event with such a large audience. We were bathed in sun, virtually surrounded by sea and mostly listening with rapt attention. The robust sound system at the pier meant the stories could be heard more clearly than in an indoor venue – and yet, there was still a sense of intimacy and even magic. The waves lapping against the pier emphasised the languorous atmosphere; people came and went during the afternoon without feeling they were interrupting – you could even nip off to have a quick swim between readings, as I did.

I went home feeling I had discovered a satisfying way to spend a Sunday afternoon. I would have liked a few more readings, but perhaps that’s just because a good story always leaves you wanting more … 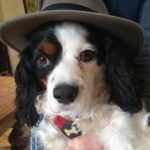