Sir David Hare at the National

On the way to meet Sir David Hare – born in St Leonards, and brought up briefly in Dane Road before moving to Bexhill – thought patterns along the lines of ‘be respectful, but don’t be sycophantic’ played on repeat. After all, this is a writer who has always managed to be politically relevant, who has always been unafraid to stick his head above the metaphorical parapet and who has sustained an astonishing career in the arts. 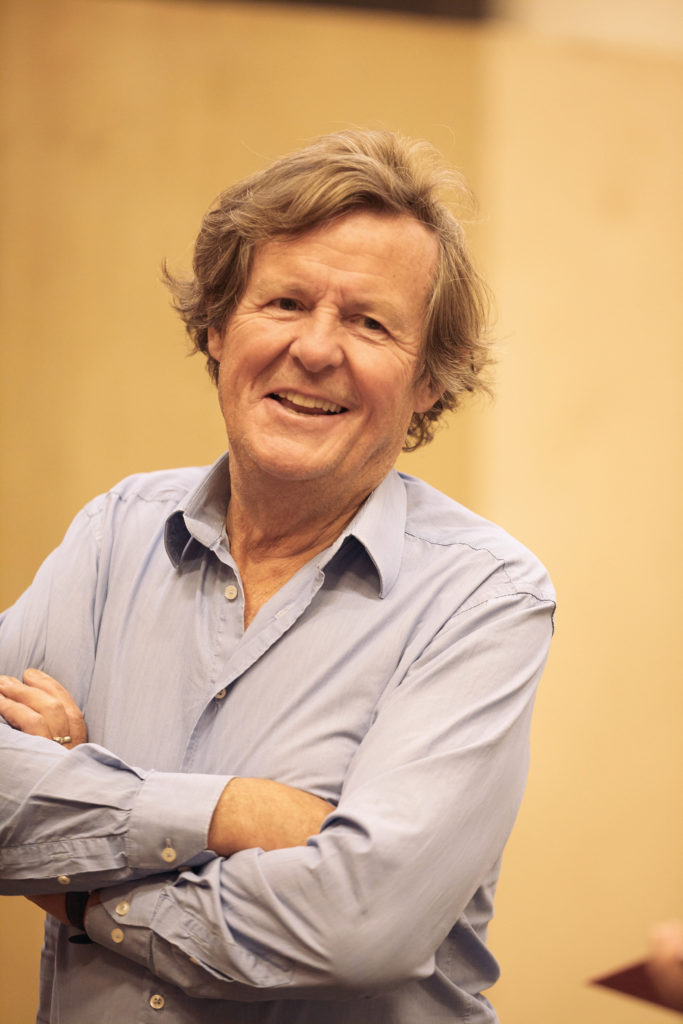 David Hare in rehearsal for I’m Not Running at the National Theatre
PICTURE: Mark Douet

My immediate impression was of an incredibly gentle, kind man – and as our half-hour ticked away, this impression only solidified. He agreed to be interviewed, he told me, because when he was visiting in August to talk at a screening of The Hours, he picked up a copy of Hastings Independent Press. And very much enjoyed it.

I proceeded to ask about Hastings – and any positive emotional attachment thereto. ‘All you want to do when you’re young is get out of the town you’re born in,’ he laughs. This was partly because he was born into the ‘run-down, slightly seedy suburban Sussex’ – a place his memoir The Blue Touch Paper characterises as a repressive drudgery. But now he finds it ‘very emotional’; he could never see the beauty when he was young.

A central theme of Hare’s work is the navigation of class and British institutions post-Empire. I was fascinated to know, then, what’s changed in seedy suburban Sussex since the 1950s and 60s.
‘I think that the repressiveness of lower middle class life was much more intense. You couldn’t be gay, you couldn’t divorce, you couldn’t admit to being sexually unhappy.’ He mentions a neighbour who walked into the sea to kill herself. ‘I know she killed herself because of utter private despair and desolation. That degree of conformism in Bexhill and Hastings was stifling of people’s identity. It was absolutely terrible.’

The measure of progress in institutionalised terms is addressed in Hare’s latest play
I’m Not Running. It follows Pauline – a doctor whose successful campaign to prevent the closure of a hospital results in her becoming a populist outsider Independent MP. Pauline wrestles with whether she should join the Labour Party and, finally, pits herself against Labour aristocracy to become leader. I was interested to know to what extent it addresses the conflict rupturing the Parliamentary Labour Party. As it turns out, not so much.

‘It’s about the idea that we love people when they’re not professional politicians, and then as soon as they become professional politicians we hate them.’ There’s a tendency to admire their authenticity, yet soon become disillusioned with their lack of political skills. On the other hand, we ‘despise people like Theresa May who are just operators – who appear to have no personality, identity or human warmth.’ For Hare, I’m Not Running asks how we can reconcile authenticity with effectiveness.

I’m Not Running raises more specific political issues: women’s representation in British politics. On the one side, a sexist Conservative austerity programme has been proved to inflict 86% of its burden upon women. On the other, Labour are apparently reluctant to place women in power. Hare expands upon the latter point, highlighting a motion put to this year’s Conference, proposing that the Deputy Leader should be female by default. The motion ‘was withdrawn mysteriously the night before and not even debated. They can’t even talk about their failure to put women in powerful positions. This is a great scandal, and seemed to me very much worth writing about.’

Indeed, Hare is renowned for writing interesting, complex and challenging roles for women: Slag, Amy’s View, Skylight (to name just three) – with Susan Traherne in Plenty having been played by Kate Nelligan, Meryl Streep and Cate Blanchett. In times where rights of representation are increasingly debated (Scarlett Johansson recently quit a role due to backlash from the LGBT+ community), I asked Hare about his own experiences of this. Has he ever been accused of being a white privileged man professing to ‘speak’ for women?

On asking more about his playwriting process, I was struck by Hare’s collaborative approach to play making. His job as writer, he says, is to get out of the actor’s way. Actors need solid ground to make emotional transitions, and if the ground is boggy it will either be better understood during rehearsal, or the writer needs to go back and resubmit. He highlights how some writers – most famously, Samuel Beckett and Harold Pinter – work differently. They would hand down the script and accept no changes. But in both cases, Hare thinks ‘their plays could be improved in the rehearsal room’ – collaboration is an opportunity, and not a challenge.

On the topic of actors, I can’t help but ask about ‘artistic love affairs’ – which Hare writes about in detail in The Blue Touch Paper. His ‘romance with Bill [Nighy] has lasted since 1979, a forty-year romance.’ He’s worked twice with Carey Mulligan recently – ‘I think she’s a genius, she’s as good as any actor I’ve ever worked with.’ What about Meryl Streep? ‘Meryl? Fantastic. She can do anything.’

Before I know it, a knock at the door and the half-hour’s up. Somewhat sheepishly, and before the moment vanishes, I asked Hare if he’d be happy to sign my copy of I’m Not Running. Of course, he did, and on the way home
I thought about erecting a guerrilla plaque in Dane Road.

• I’m Not Running plays at the National Theatre until 31st January 2019.

An NT Live streaming will be broadcast live to cinemas nationwide on 31st January, including at Hastings Odeon and Kino-Teatr. 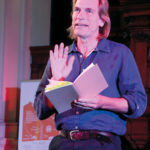