I happened to have had a long day. Cycling along the seafront on that dark and stormy night, clutching my old naval coat close to fend off the rain, a makeshift hood failing to keep the ice drops out of my eyes, I relished the fact I’m a workshy writer rather than a jobbing fisherman. With that the scene was set for the SoCo (originally South Coast artists) RX19 exhibition. I rolled up to the Stade Hall and struggled with the doors, now out of the rain, finally cleaning the water off my glasses even as they covered with condensation. This weather is good for glasses-wearers seeing exhibitions – by the time you get them clean and back on your head you’ve been transported away from the cold and wet outdoors, through a blurry and womb-like middle, and back out into a crystal clear art show.

SoCo artists, as a collective, display a range of experience and styles. Their ability to function as a group and produce fresh (not just new, but fresh) work from a brief is amazing to me: I don’t know if I’d be able to write any decent poetry to theme. That said, I realise SoCo spent a decent amount of time looking around the Fisherman’s Museum, soaking up ideas and inspiration, and hearing from Mike, a fishermen, about the life. No simple brief or group theme, but an exploration. I went there again myself as a refresher (I’m one of those people who hangs around museums for hours analysing each exhibit) and it certainly had a powerful effect on me.

One of the show’s more overt references to the Museum itself was a fabric piece depicting the albatross head and wings on display there. The body was probably eaten? Otherwise, SoCo’s exploration ranged across relevant topics. Again, the clearest connections were in seafaring – ships tossed about by the waves or idling in a bay, Rock-a-nore scenes, fabric recreations of metals, beaches and mussels (that work by Heather Collins was especially impressive) and generally showed a laudable skill, often with the brush and palette. The precise movements of the rushing white peaks of blue-green waves continue to enthral coastal artists.

However, it was evident that a deeper theme had captured the minds of most if not all SoCo creators on show – the dangers of climate change. The topic even seemed to rear its head in those otherwise apolitical pictures of a ship in a storm, particularly with their being placed next to or opposite beautiful renditions of underwater plastic bags, fish chewing coke caps, John West branded fish tins holding images of harbour life. Renewability, responsibility, and the lack of it, seemed well in focus. Anchored, perhaps, by a black installation in the centre of the room bemoaning fisherfolk suffering under poor economic conditions, their menus of fresh Neptunian produce cracked and smashed and abandoned under dark flags.

The whole group exhibited a respectable level of ability, but a few favourites were: Katherine Reekie, whose abstract structures interrupted bare beach scenes and net huts alike; Alex Leadbeater, who seemed to express problems of plastic pollution in the sea most eloquently; Heather Collins, for her fabric non-fabrics, even close-up the mussels looked almost real; and lastly Carly Ralph – because it was well-worth  finding out our fisherman have previously been called “Whip-me nakeds”. Sorry for not using more of the 150 odd names for them in this review – I’m sure it would’ve been hilarious.

• SoCo RX19 showed at the Stade Hall from 15th-24th November and included small artworks integrated within the Fisherman’s Museum. SoCo artists can be found on Facebook and will have their new website up and running in the near future. 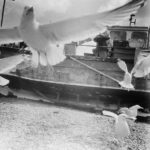 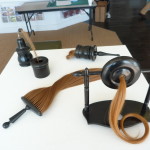 The Imaginary becomes Real – In the Light of Surrealism #2 and Inverse Reflection A. Vasudevan, The Literary Shed