Painting The Personal And Political

It’s often been tough but making art has been equalled only by political passion in the life of David Murphy.

Post-operative chemotherapy and the bonds developed with fellow patients and carers following lung cancer surgery provided the inspiration – the wry incorporation of clay pipe stems found on the Thames foreshore is no accident.

Recently celebrating his 70th birthday, over the last half century David travelled in Europe, Scandinavia and the US before reaching St Leonards in 2007.

In the 1970s he met the emerging British modernists Terry Frost and Roger Hilton, and “assimilated something from them – quite a change for a gentle Catholic boy.” Along with other members of the Cornish school, Murphy exhibited at the Newlyn contemporary art gallery.

Born in South London he left school at 15, initially working as a compositor in the days of hot metal before “I left the print to paint,” making art whenever possible and taking jobs including farm work and lumberjacking in between.

“I was brought up for a factory life, I didn’t know what an art school was, but I could draw and paint”

Self-taught in art and politics, David’ s life long commitment to socialism unsurprisingly makes him unequivocally opposed to current attempts to privatise the NHS. A proportion of any sales will go to Cancer Research and Macmillan Nurses.

• More of David’s impressive body of work can be seen on http://murphyartgallery.com and Vimeo. 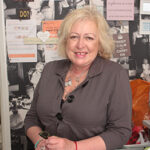 « Carib de L’Afrique: Fun for The Family And Run By A Family
An immersive experience, The House of Marcelle »