Notes from Underground Wonders of the Woods

Approaching the performance area as the sun was setting, walking past the graveyard and through the woods, I felt the anticipation of a magical evening. There were installations in the ancient trees, a blazing fire in
the fire pit and the violin and drum kit stood waiting in the stage area. An eclectic mix of festivalgoers (the youngest just two months old) were picnicking, drinking from plastic bottles (no glass allowed) and an equally eclectic collection of dogs were sniffing each other out. Apart from the chatter and laughter of people excited to be at a live concert at last, the only sounds were birdsong and the crackling of sticks on the fire. And in a clearing, like something out of a ‘Little Grey Rabbit’ book, three-legged wooden stools, created for the festival by Makermark, were set out in front of the stage, ready for the audience.

The evening began with seventeen-year-old local violinist Jada, who is a junior at the Royal College of Music. She treated the audience to some jaunty variations of Yankee Doodle followed by an eerily atmospheric, soaring and swooping version of Meditation by Massenet.

The Notes from Underground set opened with a dramatic and soulful violin solo from Yoon-ji Kim. After a minute, the drums came in – suddenly everything was transformed by the beat and an intriguing dialogue between drums and violin started up. Sometimes the drums took control, sometimes the violin led. I couldn’t categorise the music, it was such
a fusion of genres– contemporary classical, borderline jazz, hip hop breaks and Afro-Brazilian rhythms, but it also reminded me of the sounds of the Arab world and soulful gypsy folk music. It told dramatic tales of life, sadness and pleasure – one audience member described the performance as “angelic/diabolic”.

Yoon-ji is a multi-instru-mentalist, interested in ”new forms of art that push the boundaries of what is expected and fuse intricate techniques with emotional vulnerability and intellectual curiosity”. She is mesmerising to watch, her whole body moving and dancing with the music so it’s hard to tell where her violin stops, and she begins.

The intricate rhythms of Evan Jenkins’ drumming were dazzling too and showed off his range and experience. Evan has drummed with legends such as Eric Clapton and Ronnie Scott and was touring with Ben Watt when the pandemic grounded him (luckily) in St Leonards.

I was amazed to hear that this was the first live gig that Evan and Yoon-ji had played together – there was such fluent communication between their instruments and both musicians seemed completely tuned in to each other.

The intention of Wilding was ultimately “to ease us out of our lives in lockdown and back into the open air; connecting people, trees and nature through creativity”. If this performance was anything to go by, it was resoundingly successful in doing this.

According to organiser, Dan Matthews, there was an element of doubt when they first set up the festival site – doing sound checks in the pouring rain, but after that it was sunshine every day. The festival was originally planned to go ahead earlier in the spring, but the delay turned out to be a positive thing, allowing the artists to perfect their installations and the weather
to improve. The idea for the festival came from Beccy McCray and it is down to her positivity and persistence that it went ahead at all. Let’s hope it returns next year! 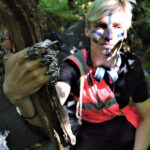