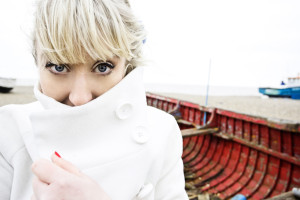 St Leonards’ Kino Teatr was lucky enough to be one of the hand-picked venues for a preview of Letters I Haven’t Written, the brand new 2017 touring show by award-winning composer, lyricist, vocalist and multi-instrumentalist Gwyneth Herbert accompanied by her 5-piece band whose dexterity belied the fact that this was only the second time it had been performed. The show is effectively being road tested for a tour this autumn which will be expanded and added to according to its location and its accumulated audience participation. 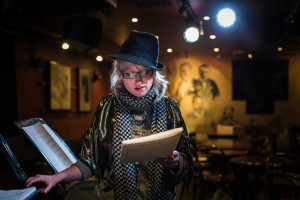 The evening consisted of two parts, the first being familiar to the many fans in the capacity audience, with songs like So Worn Out, Sweeter, Put Your Mouth Where Your Money Is, and the beautiful, poignant, Not The Kind Of Girl, in which Gwyneth demonstrates her extraordinary musical versatility by playing a heartbreaking French Horn solo. The new piece occurs in the second half of the show which explores the complex emotions involved in composing a letter through the interweaving of song, dialogue and back projected visuals dealing with universal tropes such as politics, mental health (Frosting on your Windows), friendship (The wistful Fishing For Squirrels) and social media, all combined with projected visuals from acclaimed video artist/projection designer Will Duke, a graduate of Glasgow School of Art, who has been working with writers, directors, choreographers and other designers since 2009 and has collaborated with Gwyneth in the development of this show. As the second half opens, we see, stage front, a desk containing paper and writing implements. During the show, between songs, we see the filmed overhead view of the desk, as live Gwyneth sits and drafts, and re-drafts a related letter. Towards the end of the performance, the audience are invited to write their own letters restricted to the subjects of gratitude (thank you for…), apology (sorry I…) and regret (I wish I had…), which were then collected, selected and performed ad lib by Gwyneth and the band. The band…….consisting of Gwyneth’s husband Ned Cartwright on piano, Sam Burgess (electric and acoustic bass) Al Cherry (guitar) and new recruit Bex Burch on drums and percussion, deserve a special mention for their faultless performance of what were often complex and difficult arrangements, at times reminding me of Frank Zappa and Leonard Bernstein. Gwyneth told me later; “I’ll be looking to work creatively with different elements of the community at each venue we visit – I am currently exploring working in a prison, with the homeless community, with people with mental health issues and dementia – and this dialogue element is a really vital part of how the project will unfold”.

Tell your friends, and maybe even your enemies, by the time this show pulls into your town, the tickets will be HOT.

Thrillers, Killers, Cats and all That

« It’s Halloween in Hastings and That Means Voodoo Fest! by Mark Curry
Doing It For Charity »