Paintings by Oliver Crowther at Graze On Grand

The monumental paintings in Oliver Crowther’s latest show might be physically nailed to the tall, white walls of this beautiful room, but the ideas they evoke refuse to be nailed down or become fixed.

“But”, the title of one painting, is scrawled like an afterthought on a spare bit of canvas attached to the main body of the piece. Other paintings have titles like “Saturday Afternoon …” or “Later That Evening …” and ellipses (dot dot dots) seem like the appropriate punctuation for these works – they’re open-ended, pleasingly ambiguous and elusive, resonating with what’s been left unsaid as much as with what’s spelled out, on the table, so to speak. There are words crossed out, bits of canvas stuck over previous ideas, layers of canvas and previous thoughts painted over, keeping us guessing. Rather than making a particular point, they suggest the play of ideas, or maybe the thought-stuff that ideas emerge from.

Bubbling away on the threshold ofconsciousness before they emerge and crystallise into structured thought, the paintings inhabit the same liminal wellspring that doodles emerge from, or strange phrases salvaged from a dream … the odd cup on a table, the odd cartoon hand reminiscent of The Beano’s Billy Whizz, but more often, abstract mark-making that keeps threatening to become figurative, like the waves of quantum physics that keep threatening to become pinned down as particles when observed – but never quite. The brush strokes and gestures stay in that liminal place, resisting our urges to solidify them, revelling in that threshold where everything joins up and dances, not sharing our need for “either/or”.

If these paintings are a celebration of the intangible, physically they are anything but – they sing with a painter’s joy in the sheer visceral reality of the materials, of the handling of paint, the scruffy line a crayon makes, the odd bit of fluorescent orange string sewn into a splash of blue, another kind of line made by means other than a brush, on canvasses that are anything but square and straight: wonky, rough, heavily textured, revelling in the warp and weft of the crude, raw textile itself. The paintings are very much tactile, physical objects as much as visual ones, right down to the thick metal rings punched into the corners of the canvas that allow them to be nailed to the beautiful big white walls – but never quite. 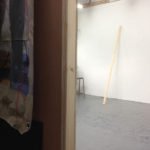 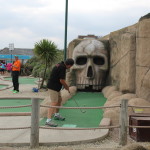