Jake has lived and painted in Hastings for the past six years. He has spent a number of exhibitions investigating the old masters of 18th and 19th Century Britain, such as Sir Thomas Lawrence, Sir Joshua Reynolds, and Sir Edwin Henry Landseer. But he’s not limited to their aesthetic, combining it with earlier baroque styles (like that of Peter Rubens) and his own instinctive manipulations.

It seems this journey began, as Jake says in the video above, with a desire to capture an atmosphere, a tone, an emotional complexity that is missing or done differently in many modern paintings. In wanting to replicate that part of the masters’ creations, he has found himself naturally progressing their styles and subjects. I think of it a little like the picture of Dorian Gray…the subjects have aged, the paint has been worn, the canvas partially exposed. It would be wrong to pretend that these people from times past, in their costumes, with their particular grandeur, should be alive now as they were then. If they’re going to have their immortality, it won’t happen as they assumed, or hoped. But Jake seems to be more interested in evoking something from the paintings themselves, rather than making grand historical statements.

Talking about his developing relationship with the masters, Jake has said it’s “a process of conflict with the ambiguous space between representation and abstraction”. He’s a figurative painter, but not constrained by that type. Despite many in the art world considering sheer abstraction to be the only way painting can expand and develop, Jake has noticed that there’s plenty left to explored in portraiture, oils, subtly altered figures. It’s a testament to his skill and instinct, or imagination. And he’s done very well by it: ploughing his own furrow by the windswept coast, he’s still been picked up by various national galleries, and perhaps best championed by Unit London, which he’s been working with variously since 2014. Unit itself is quite an interesting story – you can read one take on it here.

Having studied at Falmouth and won a Royal Academy Scholarship to study at the Prado Museum in Madrid, Jake has moved to Brighton and then settled in Hastings, with the sea, and perhaps the faded gradeur of a Victorian past, remaining a constant inspiration or background for him. We talked recently in his studio about various aspects of Hastings life.

Jake appreciates the town’s unique creative outlook, no doubt the result of its particular mix of social groups: it’s not so easy for most residents to set up a shop or walk into a marketing job if they want to get ahead, so they have to do something different, and find ways of working together (or profitable artistic niches) that other towns wouldn’t inspire.

We also discussed a shared interest in history, and ways of using or preserving it. Jake revealed an especial interest in the fluid nature of the relationship between past and present: he looks at peoples’ stories, and the chains of inspiration between generations of artists. He sees the links between all of us, and between one painting and another. Everything is interlocked, and he seems to understand this as a kind of natural process, particularly in art: that generations and eras in style would of course bleed into eachother as part of the way their champions create…and he resists separating these processes and stories into moments of personal or national politics. That’s for the viewer to do, if anyone’s going to do it at all. Jake seems to find beauty in flow and connection more than stark definition.

Professor Catherine McCormack wrote an excellent forward to Jake’s 2017 show at Unit London, “Transitions”. Amongst her other comments, she mentions the relationship of contemporary artists with digital media, suggesting that Jake’s work is so refreshing in part because it’s analogue, it’s not dominated by screens. It’s paint on sometimes huge canvasses, not pixels on a small mobile. While I’ve not seen Jake focus on this point as an important part of his work, it’s clear that he loves the interaction with materials, the physicality of painting as opposed to the casual screen-tapping of digital drafting and editing. And he uses many sketchbooks to develop his ideas. He’s not a technophobe at all, but it’s true that part of the power in his art is that it comes from physical labour, the uniqueness of one artist’s brushwork versus another’s…there’s a beauty and complexity to it that digital mediums struggle to replicate, partly because it isn’t ‘perfect’. It’s felt, it’s closer to a stream of instinct or consciousness.

Jake’s website has an excellent gallery section, as well as various reviews and other interesting media.

A review of Jake’s earlier work is available here https://wsimag.com/art/17123-jake-wood-evans-shades-of-night 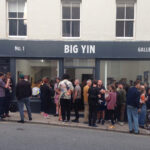