Kicking off a bumper August for performance 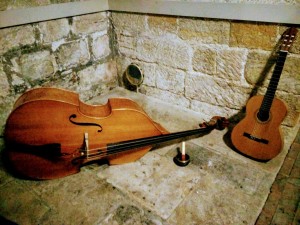 Catch the next issue of HIP for a round up of the many interesting and unusual shows on offer in Hastings and St Leonards throughout August. Don’t miss out on this exciting experimental piece kicking off the month on 1st (just that bit too early for our run).

Soprano Chiara Vinci, known locally for her work with Barefoot Opera, has teamed up with composer and musician, Tom Clarkson and producer Hanna Deeble, known for the Lantern Society’s monthly nights at the Printworks, to form a new music/theatre company, Stage Left Project.  It launches on 1st August with a playfully interactive operatic show which takes place in various spaces in St Mary in the Castle.

In ‘Les Chemins de L’Amour (The Pathways of Love) the company will take you on a journey through music, drawing on 20th century composers Debussy, Satie, Poulenc and Kurt Weill and the Jazz Manouche, or Gypsy Jazz, of Django Reinhardt. Prepare to be beguiled while you are guided through the romance and seediness of Parisian street life and later the after-hours of the cabaret bar in the crypts of St Mary in the Castle. Those who have seen Vinci and Clarkson perform together before (for example, at the Albion last November) will be familiar with the sense of theatre they bring to their performances. Here they take this further, joined by musician and composer Laurence Panter, they recreate 1930s Paris in various spaces throughout the venue and invite a small audience to follow them through the building and move around them as they perform.

1st August – 6.30pm and 8.30pm. One hour long promenade performances, limited to just 25 tickets in each group. Tickets are available through the company’s website www.stageleftproject.co.uk