During early 2018 I started to truly discover the vibrant culture Hastings has to offer, and part of this offering were local bands; one of the first I saw was the psychedelic, outlandish chaos called The Mystic Shed – made up of two local lads: Tom Jones and Kit Slawson.

Tom is the frontman, with the stage presence of Mick Jagger on the best trip of his life, whilst channelling the volatility and frenetic nature of an infamous punk rocker wearing a shirt tucked into skinny jeans that would have made even the Ramones blush. And Kit flanks him, sitting behind the drums, juxtaposed with the grungy presence of Tom – a more calculated, yet still prominent, presence. Both effortlessly exude an overpowering sense of cool, and on the stage they perform with skill, ease and power.

These two rockers careered onto the circuit, gaining a cult following and as a result becoming one of the bands synonymous with the Hastings local music scene. Along with their on-stage demeanour they create music that matches who they inherently are; quirky, talented, energetic and ready to blow the lid off wherever they’re playing.

Fast forward to 2020 and the world is put on hold as we face an unprecedented virus out-break which has crippled the fundamentals of ‘normal life’.  Hastings’ wonderfully exuberant local culture boasts events from Jack in the Green to Fat Tuesday to Bonfire night, and there is a plethora of fantastic local bands and artists who have all been left out in the rain in regard to their work and/or passion. Lockdown and the absence of big events in Hastings saw the closure of venues which were homes for the local music scene. We missed out on the Fat Tuesday fun of surfing between the characterful Old Town and the resurgent new town; we also missed hearing the cacophony of explosions, cheering, laughter and general bustle of Bonfire Night. Grassroots venues and local bands have had to use their imaginations to stay active.

Then, at the beginning of November, local pub, the Piper, held Rockdown Till Lockdown – counting down the days before the nation was about to be put into another lockdown. Playing on the final night were Hot Wax and The Mystic Shed.  Socially distanced but just as fun, the gigs acted as a bit of respite for local musicians. Following on from the interview with Hot Wax (in Issue 165), I had a chat with The Mystic Shed.

I had heard a great deal about the band, and having seen them a few times I was really excited. After setting up the Zoom call, Kit was the first to join. He had an infectious smile and an extremely welcoming manner. Tom joined us a few minutes later, coming into picture against a mandala pattern tapestry backdrop that was undeniably very ‘Mystic Shed’.

How was the gig at the Piper? How did It go and what would you say was the best part?

Tom: It was a good gig, the
first one we’ve managed to do in a while – It was nice to play for that reason alone and to actually play again after all these months. It had a certain kind of atmosphere to it that felt quite exciting – we really enjoyed playing there.

Kit: I like it when people sit down to watch us play. I think that adds something and it makes me feel like a real musician as opposed to a youth.

You must get a thrill from performing that’s unmatched by anything else?

Tom: Yeah, I think it’s the most exciting thing I do.

Kit: I agree, I think you can really get lost in it.

I first saw you guys play in the basement at On the Rocks and you came on stage and completely owned your set – without a shred of visible anxiety or nervousness. I feel it’s because you have that close friendship dynamic. When did you start playing?

Kit: It’s interesting though because you mentioned we didn’t show any sign of nerves or hid being nervous and I don’t know about Tom, but I don’t think we feel very much when we go into a gig. Maybe we do some lunges, or we say some weird things or even start shouting before a gig so that we’re good to go, unless it’s going to go badly – which we can always tell before the gig starts, but normally there’s things going on in our heads and we just go into it.

The lunges and shouting must work because you both play incredibly well and create an enthralling stage presence. How has this year affected the band and your lives? How have you both been coping with the ‘band’ part of your life being put on hold this year?

Kit: I guess we’ve just started music on our own to cope with not doing music together. Tom had started doing stuff on his own before lockdown and I had wanted to, but being put into lockdown and having Tom taken away from me by a pandemic, we were kind of forced into doing music on our own. Which has helped because now that we can play together semi-regularly again, and it turns out the playing apart from one another has sort of helped.

Would it be fair to say that working on music inde-pendently focusing on separate things aside from the band has changed how you will move forward?

Kit: I think it has – I think we’ve both discovered how strange we can make our music sound on our own and I think we want to try and put some more of that strangeness into The Mystic Shed.

Tom: It’s been a good way – as Kit said – to see where we want to push our music and what we’re doing.

Kit: I don’t know, I guess we’ve just been making stranger things and I think when we come together you can definitely see the result of us working apart in all aspects.

Tom: I think having the space to do that and focus on ourselves instead of focusing on the band meant we had more time to invest and to find what each other wanted to push forward. When we were able to come together and play, as well as when we’ve been writing, it’s definitely been showing.

A lengthy chat with Kit and Tom gives you a real feel for the type of people who are making up  our local music scene, and we hope Hastings will have every nook and cranny back full of music as soon as possible. 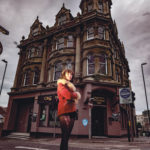