How to be a loser – a short story by Pete Donohue

Tom Bowler was a gambler. He took his chances wherever and whenever he could. Every day was an adventure, a matter of subsistence or increased debt. He twisted responsibilities into a bank roll and tossed them over his shoulder.

Tom had a wife, five young daughters, a shaggy dog, two mangy cats and a blackbird at the window that sang when he was tormented with guilt. He would have strangled that bird were he not an animal lover. In fact, his vegan lifestyle handicapped any possibility of him betting on horses or dogs; even though he often picked the winner.

Instead, Tom gambled on people and things – people who made their own choices and things that had no choice at all. Rugby, soccer, boxing and snooker were all fair game. Small monies on big odds, fired up by the alpha male on TV who touts responsible in-play betting. Big monies on small odds – dead certs rained upon and soon dead in the water.

And then the machines: ball-shakers romantically named for Arthurian legend; fixed-odds terminals lurking in gambling franchises; arcade bandits flashing seduction. In addition there was cardboard, itching to be scratched from the counters of so many local shops. At home it was online casinos. Resistance seemed futile.

Tom Bowler rolled with the punches, took the hard knocks, and tried not to fall from grace at the sinking of a black ball game. Ghosts in the machine haunted him and cards rarely fell kindly. It was difficult to walk away, harder to lose, and even tougher to recover. Somehow he always did, however. Well; after a fashion.

On Monday came month’s end and a salary injection into the Bowler account by Faster Payment. Tom had an eye on the darts and who might make the quarter finals. Before he could bet his laptop froze. Then one of the mangy cats died of old age. By the time their children had cried themselves to sleep he and his wife were dog tired.

Now it was Tuesday and a catastrophe met him at work. Tom spent the day helping save the company – and his job. The firm stayed afloat but his working hours stretched long into the night. There was no time for a flutter.

On Wednesday Tom left his wallet and smart phone at home. When he tried to buy a scratch card at lunchtime the loose change in his pocket would not add up to the price of the cheapest available. At home he dug a grave in the garden and they buried the dead cat. His salary remained intact. 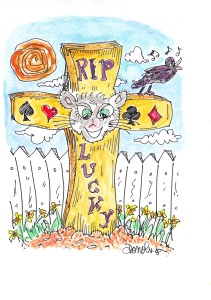 Thursday was the day Tom predicted the winner of the Cheltenham Gold Cup. It was an Irish jockey on an Irish horse with seriously long odds. None of his money was on it and Tom felt strangely proud about that. In the evening he and his family feasted on quinoa, beetroot and tofu. His wife started speaking civilly to him again.

Friday, as ever, was danger day. That end-of-the-week feeling always fired up the hope of a winning streak. Miraculously, Tom made it home without having made a bet. He dined with the family, played games with his daughters and later read bedtime stories. His wife had an early night so he waited for the TV poker channel to begin. When the time came he stood to reach for his phone but, distracted by anticipation, tripped over the sleeping shaggy dog. The dog in its rude awakening instinctively lashed out. Tom spent the next few hours at A & E with the Friday night drunks, awaiting injections and sutures.

On Saturday four of Tom’s five daughters woke up with a vomiting bug. The day soon disappeared in a flurry of cleaning and consolations, as Tom limped around on his stitched ankle. Washing machine and tumble drier spun a constant backing track to unwelcome activity.

By Sunday Tom was exhausted. Unusually, his bank account was not. He paid a long overdue utility bill and then stocked up on food at the supermarket. The children laughed. Mrs Bowler smiled. Tom made popcorn, put on a family movie, and together they all curled up on the sofa and carpet.

Tom Bowler evaluated all around him, weighing up odds and evens, trying to make sense of the going. He had a wife with a beautiful smile. He had five healthy daughters who could once again keep ice cream down. He had a remorseful shaggy dog, one remaining mangy cat and a blackbird that would sing out success at his Monday morning window. What he did not have any more was a gambling habit – the ultimate loss. Somewhere a penny dropped. Life was good again.

« The Matchmaker of Whitefriars Road
3 Weeks to go »