Christie, whose hard-to-get biography My Granny made me an Anarchist should be on all politically aware adults’ reading lists, first achieved unsought national notoriety in 1964 following his arrest in Spain after allegedly trying to assassinate the Fascist dictator, General Franco.

Released four years into a 20-year sentence he became the subject of surveillance by Special Branch and in 1972 was one of a group tried for the Angry Brigade bombings. Acquitted after the jury disbelieved police claims of finding detonators in his car, he moved back to Scotland with his partner Brenda and founded the Cienfuegos Press.

The Spanish Civil War had a life-long influence on Christie and this publishing venture, along with his imprint Christie Books and a subsequent Facebook account, frequently explored its history, within which anarchism was inextricably interwoven. Largely self-educated (Christie studied A levels while imprisoned in Spain…) he went on to publish an eclectic range of titles from political theory to Latin American crime thrillers.

Anarchists do not stand aside from popular struggle, nor do they attempt to dominate it; they seek to contribute, practically, whatever they can, and to assist, within the struggle, the highest possible levels of both individual solidarity and group solidarity

Under the nom de plume ‘Francisco Ferrer I Guardia’ Christie later became involved with the short-lived and fondly remembered magazine, The Hastings Trawler, during the first decade of the new millennium.

Christie was also the author of the Pistoleros trilogy – The Chronicles of Farquhar McHarg – a fictional account of a Scottish anarchist involved in the Spanish Civil War.

Celebrated by friends and comrades from all over the world for his intelligence, warmth and wit Christie is survived by his daughter Branwen. 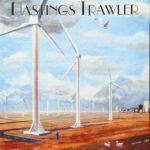