Local poet Brian Docherty, who has been a regular presence at events in Hastings, Eastbourne, Brighton and further afield for several years now, and is a member of local writers groups and poetry workshops, has just published his latest work. Blue To The Edge is a sequence of memorial poems for his wife Rosemary, who died unexpectedly in January 2016.

Brian told HIP “These are part of my response to bereavement, and are the most personal poems I have ever written. I’ve been lucky enough to be part of local writing groups such as Words For Wellbeing and Shorelink Writers, and also Hastings Stanza Workshop, where most of these poems were drafted, and later workshopped. I never set out to write this sequence; I wrote the first one at the Lantern Society event in The Printworks in September 2017, and just carried on.”

The writing groups he mentions are carrying on as best they can by Zoom meetings, or circulating work by email. Brian says this works surprisingly well for most local writers, and writers in other areas, but he does miss the interaction with other writers, and looks forward to meeting friends at Sheer Poetry, which is up and running again in the upstairs room of the Jenny Lind. (3rd Thursday of the month, 7 pm, but check with the Jenny first.) 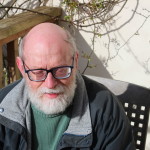