Colm Toibin has spoken of Seamus Heaney’s “always crediting the miraculous” as a reason for Ireland’s deep mourning for him. Heaney commands an affection too for his deep connection with landscape, the people he loved and his creation of meaning, simultaneously particular and fluid, through a craft so fine his poems slip by the self-conscious mind and affect the reader with immediate intensity. By such means we access the miraculous.

In the current Stains and Traces show at the Hastings Arts Forum, Raymond McChrystal has made these ideas central to his curation. Its sub-title: ‘the presence or absence of the figure’, while at first glance self-cancelling, sets up a tension of opposites which allows the artists to create meaning through a subtle play of craft and freedom.

The figures who are really present are deities – Aphrodite and Hermes take a powerful place at the entrance. Both appear in Raymond McChrystal’s beautiful exegesis of discipline and fluidity. Roger Woods recreates Aphrodite in his light-strewn reworking of Greek statues, and Frances Bristow’s superb sculptured Shakti figures are elegant, ambiguous monuments to sensuality. As goddess of emergent life she is there in Nicola Jackson’s ‘Forest Green’, which hums with organic life, and she strides forth with her son Priapus in the vigour of Adrienne Hunter’s leafless trees, the vibrancy of Agnieszka Dabrowska’s blazing landscapes, the tactility of Victoria Kiff’s figures. She is in the eternal sand of Lesley Barker’s painting (there’s even a mirror) and in Robert Cross’ tender re-imagining of scenes from the film L’air de Paris which by the sensitivity of wash and line are translated into layers of memory.

Hermes, god of the adroit, the innovative, is present in the relationship of craft, sensibility and meaning which is a strong theme throughout. As traveller too between the worlds of life and death, oppositions are his metier. As guardian of souls, he flickers through the cuts of Emily John’s finely worked imagery. While her ‘Shadow Collector’ honours Hermes, Dan Pearce’s satanic scenes with their scarcely contained fires point to his demonic aspect. Yet he’s there too in Lucy Philips’ delicacy of response to her parents slipping away from life, their presence in the world remaining in the memory of slight touches, such as a bird in the hand, a winding of clocks that no longer track time. He is present in Jim Roseveare’s subtle concrete preservation of soft shavings and gentle detritus: things which once had a role in life. And they both inhabit the dark, velvety charcoal growth of Jo Welsh’s ‘Teratoma’.

The show is a fine exploration of visual mythopoetic languages. Catch it if you can. 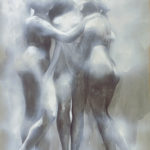 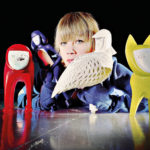