Earlier this month at Hastings Station, Judy Rogers and Nigel Sinden, the Mayor and Deputy Mayor of Hastings, opened ‘Welcome to Hastings’, a lively, multimedia exhibit brought to us by the not-for-profit Zoom Arts group. Thus opened another exciting year of art exhibitions in these two remarkably artistic conjoining towns. Here are some highlights of what to see and what to expect in the first half of 2018.

One outstanding exhibition from last year, ‘A Sense of Place: Topographic Views from the Museum Collection’ at the Hastings Museum & Art Gallery, will continue to be on view until 11th March. The exhibition provides a small but enlightening pictorial insight into the changing appearance of Hastings and the changing way it was perceived from the nineteenth century to the nineteen-nineties. Glimpses of the approach to Hastings from London Road and grand perspectives of Pelham Crescent in its heyday stand out for the way they invite us to contemplate aspects of the town on the eve of the Industrial Revolution. Don’t miss the (rather poignant) views of Hastings cricket ground, in the corridor outside the exhibition gallery, from the days before it was Priory Meadow!

Further on in the year, Hastings Museum & Art Gallery will host ‘SoCo Collect’, involving the East Sussex SoCo artist collective (originally ‘South Coast Artists’). The fourteen artists who make up the collective will exhibit new works responding to items in the museum or with the theme of collecting, i.e. the impulse to collect things whatever those things may be, or both. The exhibition will spread throughout the galleries with some works curated alongside items already in the collection. Hopefully the exhibition will serve not only as a display of local talent and artistic engagement with the past, but also as a means of drawing public attention to the museum’s rich and diverse collection of natural and cultural artefacts.

At the Jerwood Gallery, ‘Gus Cummins: Off the Wall’, on view from the end of January to mid-April, will comprise a retrospective spanning the length of the artist’s career from the 1960s to the present. Cummins – ‘one of Britain’s greatest contemporary artists you’ve never heard of’ – remains somewhat overlooked in the wider public eye; this despite his prolific output, the wide exposure his work has received throughout the UK in public and private galleries and his election as Royal Academician in 1992. Cummins’ paintings are profoundly unnerving, surrealistic abstractions evoking a hellish world of shadows, skeletal matter and inexplicable machinery. Victoria Howarth, the Jerwood Gallery’s Exhibition’s Curator, believes the retrospective will establish Cummins’ reputation as one of the nation’s leading artists: “This is Cummins’ first major solo public gallery exhibition in the UK, and it is time to recognise this great talent.”

From mid-March to mid-April, Hastings Pier (congratulations on winning the RIBA Stirling Prize!), in collaboration with the Community Interest Company, Culture Shift, will host an exhibition of automata made by members of the Cabaret Mechanical Theatre. This unique exhibition is bound to intrigue and delight. Since its foundation in 1979, the Cabaret Mechanical Theatre has built a worldwide reputation as one of the leading perpetuators of the centuries-old tradition of crafting automata (self-moving mechanical figures often performing humorous or bizarre actions). And rightly so, for its fanciful creations are meticulously handcrafted and reminiscent of the weird and wonderful world of the fin-de-siècle circus. Look out for Matt Smith’s swimming fish (pictured left), Peter Markey’s wave machines and Paul Spooner’s famous spaghetti-eating man in a bath!

This is a momentous year for Project Art Works, an organisation that for the past twenty-one years has been committed to giving people with complex needs the space and support to apply themselves to the visual arts. This remarkable organisation, based in one of the arches under Linton Road, is now increasing its premises to a second arch, thereby doubling the space available. The new space will be inaugurated with an evening of music music and a supported studio exhibition on 16 February. The exhibition continues to 11 March.

2018 also marks the fifteenth anniversary of the Hastings Arts Forum. To celebrate this milestone, artists Robin Holtom, Charlotte Snook and Matthew Burrows will curate an exhibition under the title Festival 15, which will run from 2nd May for two weeks. The aim of the festival is to bring attention to the depth and breadth of art on offer in the area. HAF will be contacting other local galleries and arts organisations to seek out ways to make sure that this opportunity to gain recognition is all encompassing. The exhibition at the Forum’s gallery will bring the work of highly regarded artists together in one place and thereby shine a light on the richness of the arts scene in Hastings and St. Leonards.

Electro Studios Project Space, a newer venue, situated further west along the seafront in a building overlooking the disused lido (now a grassy wasteland), has an exhibition lined up for July which will involve two German artists, Christian Gode and Elisabeth Sonneck. These artists – both of whom have exhibited widely in Germany but to my knowledge have yet to be shown in the UK – create minimalist, space-specific, quasi-three-dimensional work that challenges our preconceptions of space and form. 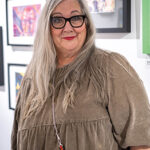 An Artist in Everyone