‘We’re talking about historically informed performances,’ says Gordon, who is talking me through the Early Music Festival, launching in Hastings in November. ‘It doesn’t mean very old obscure music, though we enjoy putting that on, too – it can mean Mozart or even twentieth-century composers. The important thing is to perform the music in context and produce the kinds of sounds that we imagine would have been heard at the time the music was written.’ Using instruments from the right time period is key so, alongside more familiar violins and soprano soloists, audiences can expect harpsicords and baroque lutes. (‘A baroque flute?’ I ask, mishearing. ‘That, too,’ she replies.)

A critically acclaimed violinist who has performed as guest leader in a range of orchestras and ensembles internationally, Gordon explains that the first violinist is the orchestra leader. ‘It’s a particularly important role when there isn’t a conductor, which was typical in the baroque period.’ She is also part of the piano trio (made up of a piano, violin and cello), opening the festival with a showcase of some of the best music written for such an ensemble.

Through her work, she’s travelled extensively throughout Europe, Asia and America and has met a number of world-class musicians along the way. ‘The people I’m inviting to perform at this festival are all established artists of international calibre, but many also have a Sussex connection. We make a point of creating a more personal connection between artists and the audience: there will be talking from the stage to put the music into context, particularly in our open rehearsals and artist in conversation events, and the players will happily chat to audiences in the bar after the show.

‘Being a performer is really fun, and there’s something about performing that gives you a real sense of connection to the various places you perform in. Many of us musicians get to a certain point in our careers though, having done a lot of touring, when we want to develop something of our own. I’ve always wanted to set up a festival.’

I ask Gordon where her favourite place to perform is. ‘Sydney opera house was great,’ she responds, ‘but Vienna is certainly one of my favourite cities as it’s so historic. I can walk the streets where Beethoven walked, and everyone loves classical music – the old and young come out together.’

Does she think that’s not so true in the UK?, I ask. ‘Everything’s so centralized around the capital,’ she says. ‘That’s why I wanted to start this in Hastings – to help with the flow of world-class music being performed outside of London.’

And where better! We look forward to seeing the shows. 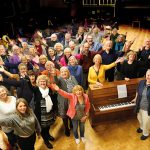 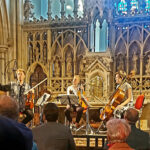