Entangled Life: How fungi make our worlds, change our minds and shape our futures

For Star Trek: Discovery, a MacGuffin was invented to allow interstellar faster-than-light travel. Many, if not most, science fiction stories would be rendered void without an FTL drive, it allows communities decades
or more apart from one another to interact, and few tales would
get off the ground without one. The MacGuffin in ST:D was, at last!, a new idea – a network of mycelium spores spread across the universe(s), allowing instantaneous travel point to point, this is the ‘spore drive’. Whilst odd, and easy to ridicule, it was in fact an intriguing extrapolation from the relatively recent discovery of a ‘wood wide web’. It turns out that trees communicate via a massive underground network of fungal connections, called ‘mycorrhizal networks’, as explained in the 2016 bestseller, The Hidden Life of Trees, by Peter Wohlleben.

In 1885, Austrian geologist Eduard Suess coined the term ‘biosphere’, a concept developed in Russian biogeologist Vladimir Vernadsky’s seminal 1928 work, The Biosphere. In this book, Vernadsky posited that the soil itself, down to the bedrock, was alive and part of our animate ecology. He also popularized the concept of ‘the noosphere’, often interpreted as a future evolutionary stage for life on Earth, wherein a ‘global brain’ develops. His ideas influenced Hastings’ own Pierre Teilhard de Chardin, James Lovelock, Lynn Margulis, Carl Sagan, Carl’s son Dorian, and may well have been one of the seeds for Rupert Sheldrake’s concept of ‘morphic resonance’. Whilst seemingly as crazy as Star Trek’s ‘spore drive’, it is clear that there is more to it than ‘weird’ ideas. Wohlleben’s books have given a wide contemporary readership some more up-to-date insights into possible vectors for inter-species communication, with a ‘hardwired’ communications system literally ‘right under our feet’.

One of the big ‘problems’ for ‘morphic resonance’, as for Jungian ‘collective unconscious’, is a material vector for ‘invisible’ communication and a medium for ‘external’ storage. In the brain and central nervous system, a network of axons, dendrites, glia cells, astrocytes, and oligodendrocytes link everything up, and storage (memory) appears to be distributed widely (and the structures involved have an aesthetic parallel in tree roots). Conscious external storage took a quantum leap with the development of writing, and another with the invention of the printing press and of moveable type (but with an ‘elite’ audience of the literate). Pheromones are often posited as transmitters of far more information than we can consciously comprehend, and are far more inclusive – and mycorrhizal networks are another, albeit, in Wohlleben’s work, a sub-surface one that involves trees and fungi.

In this new book, by Merlin Sheldrake (yes, he is related to Rupert, he is his son), this new science is pursued yet further, and may offer some ideas toward integrating mobile surface-dwelling animals into yet another set of networks. All life is interlinked, and we would do well to remind ourselves that it is, also, interdependent.

All life is interlinked, and we would do well to remind ourselves that it is, also, interdependent

Nevertheless, critics have queried a ‘chicken & egg’ element to the ‘wood wide web’ idea, suggesting that too much can read into it qua ‘distributed consciousness’, and that, instead, perhaps the parasitic aspect is more relevant than the symbiotic one. This brings me back around to you and I: the way in which neurons, the CNS, and the fluid matrices between cells in the brain (which themselves have been demonstrated to carry ‘information’), and the complex relationship between our ‘self’ (as a unity and a mind), and the viruses, bacteria, proteins etc. of which we are constituted, may also be questioned in similar terms. Whilst it is trendy to say ‘there is no such thing as consciousness, our very self is but an illusion’, our direct daily experience tells us that that interpretation is overly reductionist (even whilst we can ‘know what they mean’).

In our inability to vaporise our sense of selfhood lies our ability to extrapolate the same potentiality for complex and aware life to the soil, to fungal networks, to the biosphere itself. As to what ‘consciousness’ really is, I think our ego may over-estimate our autonomy, but reductionist ideas under-estimate what millions of years of evolved distributed ‘intelligence’ can become. My instinct is to say that we know too little to jump to conclusions either way, but that speculation, critically applied, is a fundamental key to furthering our understanding. In looking in detail into our co-evolution with fungi, as a vector to aspects of our enmeshment with ‘nature’ as a whole, Sheldrake has opened up new ideas to us. These should not be embraced in whole without question, nor rejected, but taken as an intellectual stepping stone to furthering our aware-ness of our place in the world. With the current ecological crises becoming ever more challenging by the day, it is imperative that we use every tool available to convey to humanity the degree to which we are mutually dependent upon and inextricably part of the complex web of Nature.

Alienated from this awareness, we rend great holes in this web, and there are very real limits to how much more the web can take before core functions are impaired – the cost to the biosphere may be a few thousand years of damage-limitation and recovery, but the cost to individual, large, complex creatures within this matrix (yes, mammals, including ourselves) may be extinction. The kind of holistic investigations that Vernadsky, Lovelock, Wohlleben, and the Sheldrakes have undertaken are a necessary part of our armoury in fighting back against the (self) destructive impulses our species is apparently driven by. Whether you follow Merlin into the depths of ‘mycelial minds’ that we may access via the drug odysseys of Terence McKenna and his ilk, or do not, Entangled Life will be an
eye-opening and insightful read that will open new perspectives on Life for all readers – I recommend it. 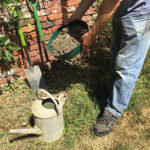