Musicians have suffered more than some other of their creative peers during the Covid-19 pandemic because so much of their ‘trade’ is dependent on live performances, but for more established artists the pandemic has not been a complete disaster, despite Sunak’s clumsy remarks. My son is a solo Drum and Bass producer and DJ and he has received generous government support through this period when his usual schedule of shows and festival appearances has evaporated. It is the emerging talent that has suffered the most.

Hastings has more than its fair share of ‘Let’s Do This’ heroes, but Tina Morris has really shifted gear to support our local music scene. Known for leading Coastal Currents, the annual visual arts festival, she said to me that she could not stand by and see the town’s live music scene come to an abrupt halt. Thus, Audiotrope was born as a musical wing of the existing Coastal Currents venture.

When talking with Tina, I am immediately struck by her boundless energy and determination. There is an invincibility about her that tells you how she was able to make Audiotrope a successful reality in such a short time.

So what is Audiotrope?  Put simply it is a web-based concert hall that live streams gigs by local musicians. Viewers are encouraged to subscribe to each act’s YouTube channel. The Audiotrope website tells us to “WATCH these live streams and support these artists by YouTube views – which in turn if they hit 1000 subscribers and 4000 hours of public watch time, each and every one can start to monetise their live streaming, helping to give them a chance at rebuilding an income when all venues are closed.”

Of course, the idea of online gigs is not unprecedented, and I am sure many of you have enjoyed watching NPR Tiny Desk and KEXP online concerts. Indeed, back in the day, The Old Grey Whistle Test gave us a terrestrial TV foretaste of online gigs when bands would play to an audience of only ‘Whispering’ Bob Harris, several camera operators and sound engineers.

What sets Audiotrope apart is its ‘For Us, By Us’ attitude.

Tina tells me that she could not access any Arts Council funding without supplying evidence that proved there was a pronounced need for the project. There is a perennial Catch-22 problem in that you can’t qualify for funding unless a project is up and running and has been shown to be beneficial to the community. However, this was not going to stop her and I am impressed to find out that she has bankrolled the project herself, paying each act £100 for their Audiotrope performance.

Alfie Rolph, the bass player with the band Blabbermouth, tells me that his band lives for performing live and that their session for Audiotrope enabled them to have a focus whilst there was no chance of gigging in the traditional way. On top of that, it has given them a chance to record in a professional studio and to come out of the process with a film recording that could be used for self-promotion in the future. Alfie has since been working with the Audiptrope team to help with planning and admin. He tells me that there are over 50 bands and artists, spanning all genres, lined up to perform as part of Audiotrope over the coming months and so, whatever the pandemic has in store for us, it looks like the project is here to stay.

I also caught up with Lil Nath, a hip-hop artist based in Battle. Despite putting out his new single, New Disc in September, his gigging schedule came to a grinding halt at the onset of the first lockdown. As a part-time healthcare assistant and father of two, his loss of gig earnings (he has opened for top International acts in the past) has had a direct impact on his family. More than that he speaks of the effect the pandemic has had on his morale.

Like Alfie, Nath was so positive about Tina’s vision for Audiotrope. They both commented on just how many new connections they have made by working on their streamed gigs. The project has also provided much needed work for studios such as Savage Sound, where many of the shows were staged, as well as for sound engineers and filmmakers.

More importantly, Audiotrope has provided a much-needed platform for artists that we would probably not know about otherwise. For them, this opportunity has been the ‘silver lining’ of the pandemic. Audiotrope has also convinced me that the Hastings music scene is deeper, more diverse and more incredible than I previously thought.

Don’t believe me? Take a look and be sure to subscribe and support. 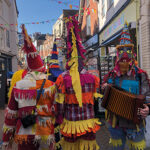 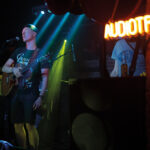 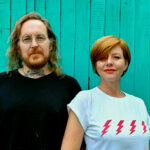 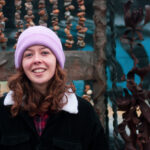