Alessandro Raho: the making of an Artist

Alessandro Raho is one of the artists that recently took part in the Everyday Heroes Exhibition organised by the Southbank Centre to celebrate frontline workers during lockdown (read Local artist paints one of Hastings’ Everyday Heroes here). Rupert McAvoy talks to him about his motivation and the things that shaped him.

Have you always been interested in painting?
Not in painting, but always in drawing. As a child I started drawing very quickly and loved it – figures and faces.

I think in a mysterious way one always wants to draw people. You could say you are obviously attracted to people, to faces, but what is fascinating about painting is very elusive – it’s a very strange thing to depict a three-dimensional world in two dimensions and I’m very attracted to it.

I suppose painting came when I became a teenager. I thought, well why don’t I pursue the thing I love most? – something to do with drawing. I can go into illustration, I could maybe go into design. But these forms have a restriction or a limit; if I did painting or fine art, there would be no limit on my interest from what a drawing might be. So I thought: “I’ll go for that!”

When you were at Goldsmiths, was that heyday or post heyday?
Just post heyday, but a brilliant college. Before Goldsmiths I’d taken a year out and done a Foundation. I didn’t get in anywhere initially. Croydon were doing this, ‘Giving three more places of the lot left over’. So I went with my portfolio, thinking “my options are really starting to close down now” and the guy interviewing looked at it and said, “No I don’t think so”.

As I was packing up, I said, “Look I know I can do this. Will you just give me a chance? I know I can draw well but I don’t know what you want me to do”. He looked up and said: “You can have a place.” I left in a daze. I couldn’t believe that had worked. It never works!

And I didn’t get in anywhere after my Foundation course either. I had this year in a council flat in Deptford [long story] and I decided to just fully commit to painting as much as I could. After that, my first interview [for a degree course] was at Newcastle. They gave me a place immediately and that’s when I thought: “This is changing now”. I’d been reading about art and understood a bit about art history. So I went back to Deptford with a really good feeling.

But I’d also applied to Goldsmiths [just round the corner] and I got a place there. My girlfriend said, “This is the place to go” because of what was happening with Damien Hirst and Tracy Emin. So I went there.

I had amazing tutors, including Michael Craig Martin, that everyone knows, and another guy called Jon Thompson. And they had created the Goldsmiths’ course, decided how they were going to change the teaching of art degrees in London.

I’m a big believer in art education and I hate the way it’s all being monetised. It’s a vocation and there’s not much on offer for doing a fine art degree but it oxygenates the culture. There’s only two things you can do if you do a fine art degree, be an artist or be an art teacher. So if you think they’re going to charge you £20,000 to do it I worry you’ve really killed it. There are all sorts of things that happen with art degrees that you can’t monetise or show are of value to society, but they are of value in different ways.

I asked you about Goldsmiths because I got the impression back in the day that it was quite conceptual and anti-painting and had very rigid views on how things should be done which seemed to run contrary to what you said earlier.
Yes, that’s a misconception about Goldsmiths. I was a figurative painter from a tiny child drawing people, trying to figure out how to do that. I was attracted to that kind of work. So [in my interview], I went to see Jon Thompson. He was looking through my portfolio and said: “It’s funny because you paint like an Italian”. I think he meant I painted very three-dimensionally.

I didn’t know at the time, but Jon Thompson was a serious thinker and an expert on Italian art – he loves Art Povera which is very concept-based, poetic, sixties, Italian. So I said: “That’s funny because actually I am half Italian”. (At the time, trying to fit in, in England, I called myself Sandy Davidson using my stepfather’s name.)

Through the whole of Goldsmiths, I was never challenged about my realist style of painting. I think they saw I came in regularly which they liked! They would make you think about why you paint and what you were doing. Like, “What do you like in the culture right now?” or “What are you interested in?” In the end it came down to, “Do your paintings look like they reflect your time?” And I think that gave me a way in.

A lot of the tutors there were quite well-known artists and they really were there to help students. They weren’t trying to put us down. A really generous spirit there. In some ways, it’s a brutal heart-breaking world, the art world, and teachers might not want their students to succeed. But they weren’t like that.

No, I think Goldsmiths is misrepresented. People have often asked me: “How on earth did you go to Goldsmiths? Didn’t they tell you to put a glass of water on a shelf or something like that?” (referring to a brilliant piece by Craig Martin, titled An Oak Tree, that’s in the Tate Collection.) What I got from them was a kind of working practice. You are left alone on the basis that, “When you leave here, you’re going to be left alone a lot more, so if you can’t cope with that it might not be the right career for you”. It was a real wakeup call for a lot of people that were used to an institution that pandered to finding them interesting.

But on the other hand you would have great tutorials. Peter Doig would come in – he looked at my paintings and asked me, did I know this artist Alex Katz? I didn’t, but Goldsmiths had such a great library of art books, so I ran straight up there and opened this Alex Katz book and it was just what I needed to see. It opened up all kinds of doorways. He was just painting family and friends like Hockney and it gave me permission because it was very much in the spirit of my sensibility.

Michael Craig Martin gave me a tutorial one time in which I said, “I don’t like the edges in my paintings, where the figure meets the ground”, so we had a whole session about that: edges in paintings. It was so practical, really what I needed. So I look back at the good education I had at Goldsmiths and think how lucky I was. 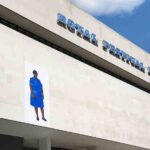