Sitting at opposite ends of the ‘Hastings-St Leonards’ promenade, two new public artworks Seawall and Painting the Prom bring the elemental nature and social role of our shoreline into active question.

Starting in Old Hastings I track down Seawall on hearsay alone: a tumble of large, tethered blocks, with PVC coverings cleverly printed to look like concrete. Tucked neatly into in a small public square to the east of Hastings Contemporary gallery, this angular, interactive sculpture by Andreas Angelidakis is proving popular with summer visitors. The soft-play allusion appears to be a cue for participation, young people in particular gambol up them like mountain goats and parental calls of “needing to leave” are met with enthusiastic dissent.

So with the popular vote secured, is Seawall a relaxed family-friendly artwork with a stony message? This is evidently a work that references climate change, the Gallery’s website coolly reminding us of its “close proximity to the seafront, and the encroaching ocean”. Living and working in Athens, Angelidakis describes himself as “an artist blurring fact and fiction”; his work often dealing with the “notion of ruin”. Seawall is one of seven site-specific artworks commissioned by England’s Creative Coast for their Waterfronts series, connecting the coastlines of Essex, Kent and East Sussex .

Walking due West, to St Leonards, a meteoric rise in colour and mood hails the approach of the Goat Ledge Cafe. Just beyond the serving hut, on the lower promenade, a seamless stretch of newly decorated Suntrap Booths is brimming with occupants. Welcome to Painting the Prom, a series of murals “created by and for the people” in public participation with Good Stuff in St Leonards and Home Live Art.

Everything about this community-driven art project feels rigorous and authentic; dramatically different visuals respond to a universal callout theme of ‘Daydreaming’ and thrive in the bright coastal light. Visitors are keen to chat. First up I meet Bill from Eastbourne, he is absorbed with photographing the artwork by the Refugee Buddy Project (a Syrian Resettlement initiative). The welcoming banner “You are safe here” is the focus of Bill’s photo, and also a prevailing mood along the promenade as people take pleasure from re-claiming the booths that at times felt less than welcoming.

Further along, I chat to Barry sitting in a turquoise booth wearing a turquoise T-shirt. He describes how the area is flourishing, in his words “a Notting-Hill style feel with art, cafes and antiques”. I ask him about his choice of booth and the colour he is wearing, he laughs, “unaware”. I remain quietly confident that the uplifting aquamarine and prismatic tones of the Seaview Wellbeing Centre mural played some part in his selection.

Final chat of the morning goes to young Matilda, who defies age expectations and chooses the contemplative pebble-stone design by artist Scott Garrett as her favourite “because it tells us something”. Garrett’s artwork features a rhythmic arrangement of irregular pebble shapes with the words “Our differences don’t have to divide us”.

• More information on the two installations from Painting The Prom Digital Gallery
goodstuffinstlens.com/ptp-gallery and englandscreativecoast.com 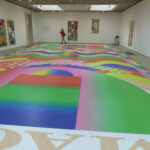 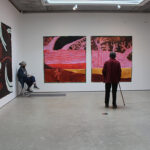 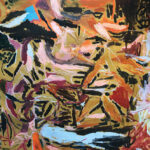