Kent Barker finds that the current vicissitudes of the theatre in Britain under Covid has parallels with the Elizabethan stage in Shakespeare’s time.

“Actors have always had to juggle a lot of plates to bring in money from a range of places, but this is really squeezing creatives in a whole new way.” Hastings actor Gareth Wildig’s response to the Covid lockdowns is doubtless shared by many in the profession today.  But their plight is not new.  400 years ago, around the birth of modern theatre in Britain, actors were faced with a similar catastrophic loss of income. Then it was not coronavirus, it was the plague.

According to Shakespeare biographer William Baker, London’s theatres were closed for more than half of the decade between 1603 and 1613 – 78 months in all. But it had kicked off in the previous century.
In 1592 Shakespeare was finishing his Henry VI history cycle as part of Lord Strange’s company of players at the Rose Theatre when the Privy Council announced that all playhouses in the capital were to be closed as a precaution against the approaching plague. David Nichol, in his fascinating blog based on the diaries of leading Elizabethan theatre impresario Phillip Henslowe, says: “this was a terrible setback for Henslowe, for Lord Strange’s Men and for everyone else involved in the theatres of London. Suddenly, they were all out of work. So Edward Alleyn, Will Kemp
and their team did what actors had always done in the old days: they packed up their gear in wagons and hit the road, touring the country and performing in many different towns and cities.”

Today it’s not so simple, as the lockdown has become national. Actor James Hayden-Thomas is based in Kent but has often performed in and around Hastings. He says the only work he’s been offered since March was unpaid: “I have lots of discussion with fellow actors about doing outside work, open air plays, murder mystery etc, but the rules kept changing and obstacles arising. I had a tour booked for later this year and very possibly panto, but everything has been cancelled.

Shakespeare turned away from playwriting and concentrated on his poetry

Gareth Wildig tells a similar story: “Theatre is very quiet – venues have no surety about how to cover their costs. Locally, creatives are still making and rehearsing material, despite the lack of clarity about when it might be seen by anyone.”  He’s been working with John Knowles, one of the town’s leading playwrights and producers, who has done some limited Covid-safe outdoor performances but, says Gareth, on a small scale because that’s all the situation will allow.

In 1593 with London theatres still closed, Shakespeare turned away from playwriting and concentrated on his poetry. Over that and the following year he wrote Venus and Adonis, and the Rape of Lucrece. Money must have been tight for all concerned and patrons were sorely needed.  When James I succeeded Elizabeth to the throne in 1603, with plague sweeping through London, the new king issued a warrant authorising Shakespeare and his companions to perform plays ‘throughout the realm’ under royal patronage. Thus, the former Lord Chamberlain’s players now became the King’s Men. After their first performance in front of their new sovereign they were awarded a bonus of £10 in compensation for their loss of earnings under the plague shutdown.

Actors today would appreciate such largesse. James Hayden-Thomas says his government ‘grant’ was based on a year he was unable to work through illness and, so far, he’s received the grand total of just £640. “I did get a gift from Equity’s benevolent fund of £400, which was a life saver,” he says. Gareth also believes the state should be doing more: “The government will get to the arts last because to them it’s not important. I’ve had to diversify – during the summer I set up a business called The Freelancer’s Friend, helping creatives with the tasks lingering at the bottom of their to-do lists. I do know that there are a lot of creatives in this town who will defend the arts with all their might. In the acting circle, we’re already laying plans for performances in 2021, because we know the value of theatre and the arts, even if the government doesn’t.”

It might not seem much consolation in the circumstances, but today’s actors could be worse off. After the years of plague in Elizabethan and Jacobean London, the rise of Cromwell and the Puritans meant that playhouses were again under threat. In September 1642, following the start of the English civil war, the Long Parliament ordered the closure of all London theatres declaring that “lascivious Mirth and Levity” was incompatible with the current “times of humiliation”. A subsequent act of Parliament in 1648 then declared actors to be ‘rogues’ and instituted fines for spectators. For eighteen long years the playhouses remained dark, and actors unemployed.  It wasn’t until the restoration of the monarchy in 1660 that the ban was lifted, as Charles II came to the throne. It is a proposition devoutly to be wished that the theatre today won’t take so long to get back on its feet. 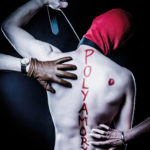 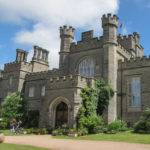 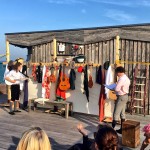